The Obsidian Trail: a glimpse into the 12,000-year history of the Owens Valley. 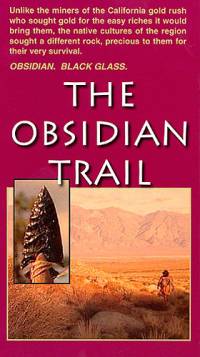 “The Obsidian Trail,” is a highly acclaimed half-hour documentary illuminating the prehistory of the Owens Valley in eastern California, as seen through the eyes of archaeologists, scholars, and Native Americans. The three part film (as published on YouTube) consists of interviews, cutaways, animations, dramatizations, and off-camera narratives. It tells its story by analyzing artifacts that early inhabitants left behind.

The California Department of Transportation (CalTrans) District 9 produced the video in association with Far Western Anthropological Research Group, and Cinnabar Video. “The Obsidian Trail” is part of the department’s efforts to publicize its work in cultural resources, archaeological research and Native American coordination programs in the Inyo-Mono region of California.

The title  of the video refers to the mineral that Native Americans used for creating tools, including projectile points such as spears and arrowheads. Obsidian, which can be “flaked” into edges that are sharper than surgical steel instruments, was highly regarded in the area and traded from as far away as the Pacific Ocean, Texas and Nebraska.

Archaeologists have been working in Owens Valley and the surrounding region for more than 50 years, trying to piece together the lives and relationships of the earliest inhabitants. Archaeologists have recorded petroglyphs, pottery, and bone, wood, and stone tools, piecing together the lifeways of the region’s original inhabitants. With advances in analysis of obsidian (black volcanic glass), they are re-examining what ancient arrowheads, points and flakes can reveal and are learning some surprising things.

“The Obsidian Trail” has been distributed to schools in the Inyo-Mono region, and even as far away as New Mexico and Germany. It is shown at the Mono Lake Visitor’s Center in Lee Vining and the Maturango Museum in Ridgecrest.

The video has also been distributed to local Native American groups and many others outside of District 9: it is often requested by scholars at University of California campuses, as well as those in the California State University and California Community College systems.