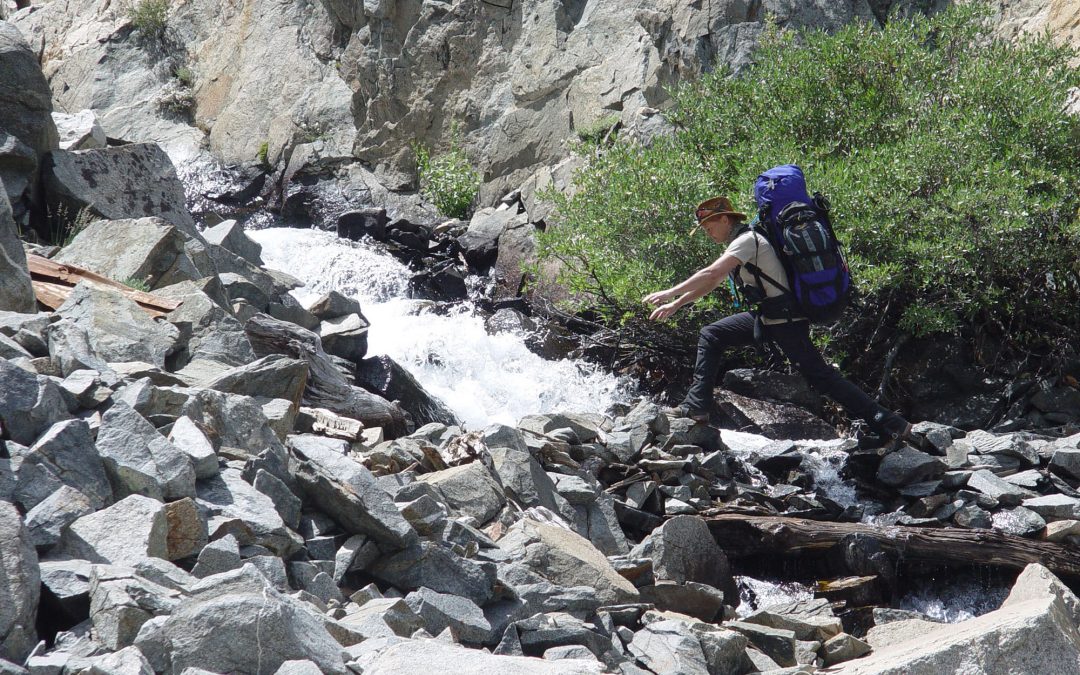 The John Muir Trail (JMT) is an American classic—211 miles that wind through some of the West’s (and the country’s) most beautiful mountain terrain—sequoia forests and granite mountaintops and deep canyons. The trail’s namesake, John Muir, is well-respected for founding the Sierra Club and for his involvement in shaping Yosemite National Park in the late 1800s. The trail follows along the Pacific Crest Trail (PCT) for 160 miles, connecting its northernmost point at the Happy Isles trailhead in Yosemite Valley to the highest peak in the continental United States at its southernmost point—Mount Whitney—whose summit rises to 14,505 feet. While seasoned hikers often take three or so weeks to hike the trail, some do it in less time, and others, more. Either way, take your time to enjoy the scenery—at your pace. There’s no other trail like the JMT in the world.

At just over 200 miles long, the John Muir Trail courses through some of North America’s most beautiful terrain. You’ll hike through Yosemite Valley and past its steep granite canyons, through Sequoia National Forest and beneath some of the tallest trees in the world, through the crevices and valleys of Kings Canyon National Park and the Sierra Nevada, and into the Ansel Adams Wilderness. The John Muir Trail is a legitimate through-hike, giving an abbreviated journey along some of the PCT without compromising the vastness of scenery the Sierra and Northern California are famous for.

There are couple ways to access the JMT near Bishop. The first option is to drive about an hour and 20 minutes south from Bishop to connect with the trail at its endpoint at Mt. Whitney. This is obviously the best option if you are thru-hiking from end to end as well.

If you just want to sample the JMT trail, or take a shorter backpacking excursion, the best place to hit the trail is via the Bishop Creek Trail. Starting at South Lake and heading up the Bishop Creek Trail, you’ll climb almost five miles just to get to the JMT/PCT Trail. But along the way, you’ll pass by several scenic lakes with mountain landscapes in the distance. Once you get to the JMT, go as far as you would like in either direction, then turn around and go back the way you came. There is no permit required for a day trip.

If you plan to have supplies delivered along your route, plan for deliveries near LeConte Canyon/Bishop Pass or Kearsarge Pass. Wilderness permits are required before beginning your trek. Many ask whether they should hike from north to south, or south to north. Both routes are common, and are entirely up to the preference of the hiker(s). If you hike north to south, you’ll summit Mount Whitney with a heavier pack at the beginning of your hike; whereas a southbound JMT hike eases into the higher, more technical sections of the trail, making this the more popular route. Black bears are common along the trail and it’s required to properly store food. Please be mindful of wilderness as bears that come in contact with humans are often euthanized. Pack in bear spray, and have it on hand at all times.

Who is Going to Love It

The JMT is a great destination for many folks, including those who’ve done a through-hike and those who are just beginning longer backpacking excursions. It’s nowhere near as long as the PCT or the Appalachian Trail, but it has no shortage of scenery. Because it’s just 211 miles long, it’s a through-hike that can be achieved in a shorter amount of time—anywhere from two weeks to more than a month, depending on your endurance and timeframe. Some take on the JMT as training for a longer through-hike, while others take on the JMT as a reminder of a completed feat. To many, the JMT is their ultimate goal.

Generally speaking, the trail is open from July through September. It’s vital that hikers plan their course with weather in mind, and follow the forecasts before embarking on their adventure.

Weather can change quickly in the Sierra and it’s necessary to be prepared and have a course of action in case inclimate weather interrupts your journey.

Food caching is illegal along the John Muir Trail.

About the Author: Roots Rated 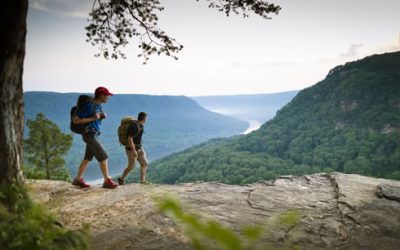 What is RootsRated? RootsRated is a media platform that connects users with the best outdoor experiences, hand-picked by local outdoor retailers and their networks of local experts. We are NOT another website full of crowd-sourced trail reviews. We harness the collective expertise of high-level local runners, skiers, riders, paddlers, and climbers. Then we share it through exclusive stories and destination reviews—curated city by city—about the best trails, runs, routes, crags, and more. RootsRated brings people who love the outdoors together, through insights from locals who are most in the know.

Last year... Please #RecreateResponsibly!!!Remember this from last year? The smoke was horrific, and most of the fires weren’t even right here. Please remind ANYONE that is going camping, be it here in Inyo County, or elsewhere, to PLEASE BE CAREFUL WITH FIRE!!

Earlier this week Mammoth Lakes Fire Department responded to TWO different fires that started because campfires were not extinguished properly (one was a dispersed camping fire, and the other was in an area where fires are prohibited)!! It is going to be a tough year with the dry conditions, so we need to act accordingly!! Extreme fire conditions already exist. If you make a fire, please do it in a campground where there are fire pits, and make sure it is COMPLETELY out.

We need to stop the lightening and get rid of the power lines. No more electricity 🥰

Just everybody use common sense. And don't forget to pick up after yourselves. Leave no trace. <3

It gripes my ass when people just don't care. It doesn't take rocket science to put out a camp fire and to know how dry it is and we have international signs where people around the world know what they mean even when they can't read. They have no heart or respect for life animal's or human. I pray we don't have a repeat of last year.

It was awful, be careful out there. Be mindful of nature.

Its sound like it will be a dry summer across the west.....be careful....barb

If you are wondering what it's looking like up Big Pine Creek, here is a shot from a couple of days ago. It is the view up the South Fork of Big Pine Creek from the North Fork trail. Thank you to Alan Haight for this stunning shot!!

We welcome you to send your beautiful photos to us in Messenger, or on Facebook or Instagram make sure to tag us #VisitBishop! Thank you!

Gosh this is beautiful!

Some of the most rugged terrain I've ever seen is up that canyon! Truly an amazing part of the Sierras.

Have hiked in this region. So beautiful

I highly recommend visiting Bishop. So much to see and do. 🤠

Went as far as june lake

It’s spring. Wildflowers are blooming, roads are opening, and more folks are traveling and camping. It’s dry out there. Please please, please be careful with anything that could start a wildfire!!! 🔥 This reminder is for locals and visitors alike. It’s going to take ALL of us to prevent wildfires in the months to come.

This is so beautiful!

I love that area!!

In case you didn't get the memo: Mule Days is a GO this year!

In concert with health officials, they are planning for a safe event that fans and spectators will remember for years to come. In compliance with State guidelines, mandatory restrictions and capacity limits will apply to arena seating, so be sure to call now to get your reservations. Some of the popular indoor events have been canceled due to these limits such as the Concert and Opening Night Supper. Sadly, the parade is also on hold until 2022. Good news, though... Mule Days IS happening this year and is going back to the roots where Mule Days is all about the mule!

I HAVE NOT BEEN TO BISHOP FOR 30 YEARS AND I'M LOOKING FORWARD TO A VISIT THERE THIS YEAR. I WAS BORN THERE AND I MAY HAVE A 60TH CLASS REUNION THIS SUMMER. WAITING TO HEAR IF IT'S GOING TO HAPPEN .

Yeah!!! The most fun you can have and still be legal? Or something like that. Stay well.

Thank you for being safe...

We will be there been going there for years Love it

No parade outside? Well that’s California for ya! At least there will be an event.

Yep Mule days is coming. this event is when the people are put on show and the Mules get to work out. Mules get to show how smart they are and the people get to show (well we will let you finish this sentence). Come as see for yourself what it is like to be here.

So glad to hear that!!! Miss Bishop soooo much!

The "Mule Days" bumper sticker has worn off the back bumper of the trailer.

Better something than nothing. Sorry to miss it.

Anything happening for 4th of July?

what about the arts and crafts at the city park? is that still on?

Perhaps they should give the finger to the very person who ignores the orders for his own pleasures!