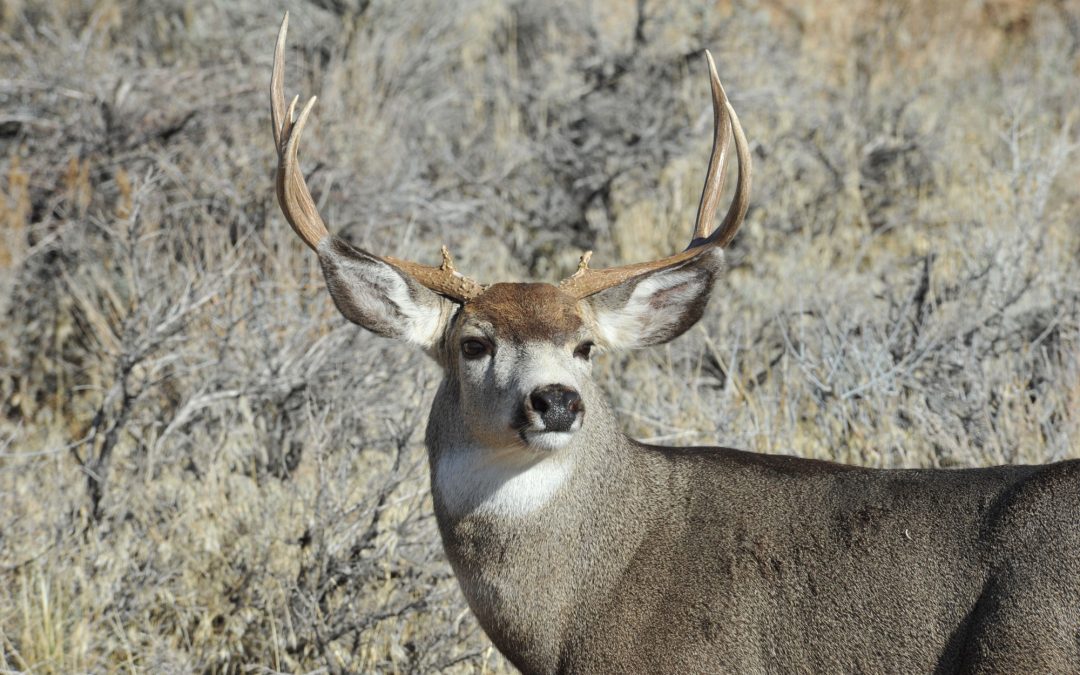 On a recent trip during President’s Day Weekend, our outdoor touring group spotted about ten deer just outside the small village of Rovana.  Feeding on nearby plants, these docile mammals allowed us to get within a few yards of them while we snapped away on smartphones, ipads, and SLR cameras.  It was real joy for the city dwellers of our group who were amazed at how close they were to the wildlife of the Sierra.

Mule Deer in the Owens Valley 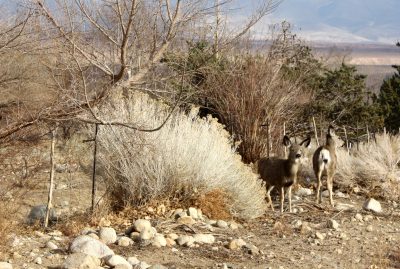 Mule Deer are a common winter sight in Round Valley, a small valley a few miles northwest of Bishop.  This valley, adjoining the sheer Sierra Nevada escarpment, serves as a major home base for Mule Deer during winter months. The Round Valley deer herd consists of approximately 3,000 Rocky Mountain mule deer (Odocoileus hemionus ssp. hemionus) whose winter range is in Round Valley.  When the smell and taste of fall hits the air in the mountains, large numbers of deer herd together to work their way out of the steep canyons and upper reaches of the alpine high country down into lower elevation valleys where winters are mild and food is more plentiful and accessible.  Some travel over fifty miles to get to this desirable “winter” range. In the spring, the Round Valley mule deer herd migrates up through the mid-elevations, and the one-mile wide bottleneck in Swall Meadows, to the alpine meadows of the Central Sierra to give birth and to access good forage.

Approximately 75% of the herd migrate north in the spring through Swall Meadows, around Wheeler Ridge in southern Mono County, turning west into Long Valley and up into the Mammoth area. Groups of deer will veer off the migration route and travel up canyons into the high Sierra. The other 25% migrate through the Buttermilk area up into the Bishop Creek drainage and over the high passes into the Central Sierra. The Round Valley deer herd has a relatively small winter range, compared with other mule deer herds throughout the west. Their winter range is only about 30 square miles, while their summer range spreads out to about 1,000 square miles.

Sagebrush (Artemisia tridentata ssp. tridentata) and antelope bitterbrush (Purshia tridentata ssp. tridentata) are the main components of the plant communities that mule deer depend on for food and cover. Antelope bitterbrush is a beautiful evergreen shrub in the rose family. Bitterbrush is especially important to wildlife in the fall when the deer return from the high elevations. The leaves and shoots provide significant quantities of calcium, phosphorus, fat and crude protein at a critical time of year for the deer. Deer also utilize the meadows, streams and willow thickets that are found in the migration corridor. The broad expanse of bitterbrush plants in the valley provides the necessary forage for deer to survive until warm weather beckons them back to the mountains. The integrity of the valley’s habitat and absence of human development makes Round Valley a prime location to find wildlife in the winter. 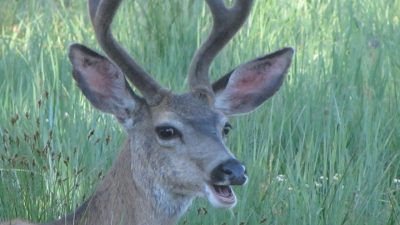 Mule Deer have large ears that move constantly and independently, from whence they get their name. They do not run as other deer, but have a peculiar and distinctive bounding leap (stotting) over distances up to 8 yards, with all 4 feet coming down together. In this fashion, they can reach a speed of 45 m.p.h. for short periods.

This stocky deer with sturdy legs is 4 to 6-1/2 feet in length and 3 to 3-1/2 feet high at the shoulder. During the summer, the coat on its upper body is yellow- or reddish-brown, while in winter more gray. The throat patch, rump patch, inside ears and inside legs are white with lower portions running cream to tan. A dark V-shaped mark, extending from a point between the eyes upward and laterally is characteristic of all Mule Deer but is more conspicuous in males.

The Cervidae Family includes deer and their allies, including moose, elk, and caribou. Member of this family occupy a wide range of habitats, from arctic tundras to tropical forests, and can be found over most of the world. All have slender legs. Most are brown or gray in color, with white spots characterizing the young, and in a few species, the adults. In all but one genus of cervids, at least the males have antlers. Males are larger than females. The bucks’ antlers, which start growth in spring and are shed around December each year, are high and branch forward, forking equally into 2 tines with a spread up to 4 feet.

The mating season for Mule Deer reaches its peak in November and December, as antlered stags round up females and fight for their possession. Antlers are shed after the breeding season, from mid-January to about mid-April. Most mature bucks in good condition have lost theirs by the end of February; immature bucks generally lose them a little later. Males and females mix freely while traveling together in groups during winter months, often down to the desert floor. When antlers start growing again in the spring, the group breaks up. The females go off by themselves and eventually give birth and nurse their young; the males wander in friendly twosomes or small bands throughout the summer months as antlers grow.

*Cocktail party fact* Mule Deer have no canine teeth and, like the cow, have a multi-part stomach, the first two chambers of which act as temporary storage bins. Food stored here can be digested later when the deer chews its cud.

From April through June, after about a 200-day gestation period, the doe delivers 1 to 4 young (normally 2). Fawns are born in late May or early June. A doe will usually produce a single fawn the first year she gives birth and then produce twins in following years. The fawn, colored reddish with white spots, weighs about 6 pounds at birth. It must nurse within the first hour and stand within the first 12 hours. During early weeks of life, the fawn sees its mother only at mealtimes for feeding. Spots begin to fade by the end of the first month.. They have white camouflage spots and are further protected by having little or no scent. Fawns usually stay with the doe for the first full year.

Horton Creek Campground, although closed during winter for camping, is a popular location to walk into and find wildlife.  Additionally, you can follow the nearby Round Valley Road into the community of Rovana and find deer browsing along the road as we experienced. We urge you to take photos and memories, but also to allow these wild animals their space to relax, graze, and enjoy the winter sun. Seeing these deer close up is a great way to talk to your kids about nature and to get them excited  about the great outdoors.

This blog post was sourced from several trusted resources, including Joe Pollini of the Bishop Visitors Information Center, the Eastern Sierra Land Trust (local experts on the migration corridor and habits of the Round Valley Mule Deer herd), and the Desert USA newsletter, a fantastic source for all sorts of information on the western arid lands (Click the link for a great video on Mule Deer in Zion National Park). 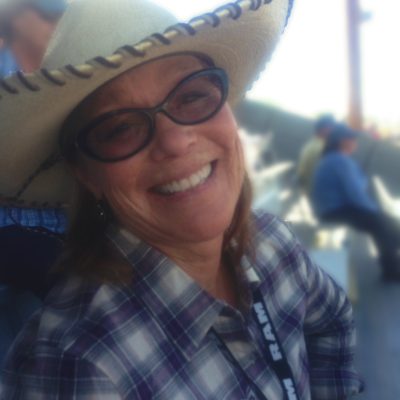 We’re in the middle of a hot stretch and thought

It’s Friday and for so many of us that means, it

As summer reaches full stride and travel plans are

What better way to close out a week of rodeo than

Come out and support the future of rodeo at this y

This was a special Mule Days for all of us. Thank

Wishing everyone a happy, safe and grateful Memori

Quick update for all the friendly travelers out th

Inyo County is now in the yellow tier with only on

The Greatest Mule Show on Earth kicks off tomorrow

We are sooo excited to welcome everyone back to ou

It’s going to be a good summer! #RecreateRespons

We hope everyone enjoyed their weekend! Please see